Art-project presented by the non-profit organization Trixiewiz e.V. in the swimming baths „Stadtbad Oderberger Straße“: On May 28 and 29, 2005 we explored in various and creative ways why the female body causes TROUBLE in the context of identity, gender, cultural heritage and sexual orientation. TROUBLE 1: female body was the creative framework – the female body the „material“ with which the international artists work in various exciting ways.

„TROUBLE 1: female body“ was an international art show as well as an intercultural meeting place. The theme “female body” was deliberately approached from a critical and non-discriminatory perspective using all the different forms of artistic expression. In this event women were not objects, but subjects and experts of their environments.

Twenty female artists from Germany, Austria, Switzerland, Italy, Greece, Turkey, the USA and Brazil presented their paintings, photographies, videos, installations performances, modern sculptures, music and dancework in Berlin. The artists approached the topic “female body” in various ways, because the body in itself is not unambiguous but multilayered and full of meanings. The works of art clashed, mergeed and overlaped in their effect, they became part of the location – the swimming baths „Stadtbad Oderberger Straße“ – creating the experience of a synthesis of the arts. Artists also gave aesthetic form to the area in front and inside the swimming baths itself and an exceptional cultural program was presented parallel to the exhibition. 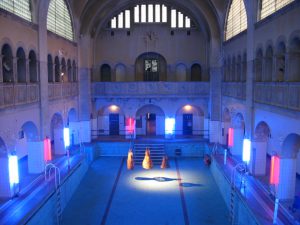